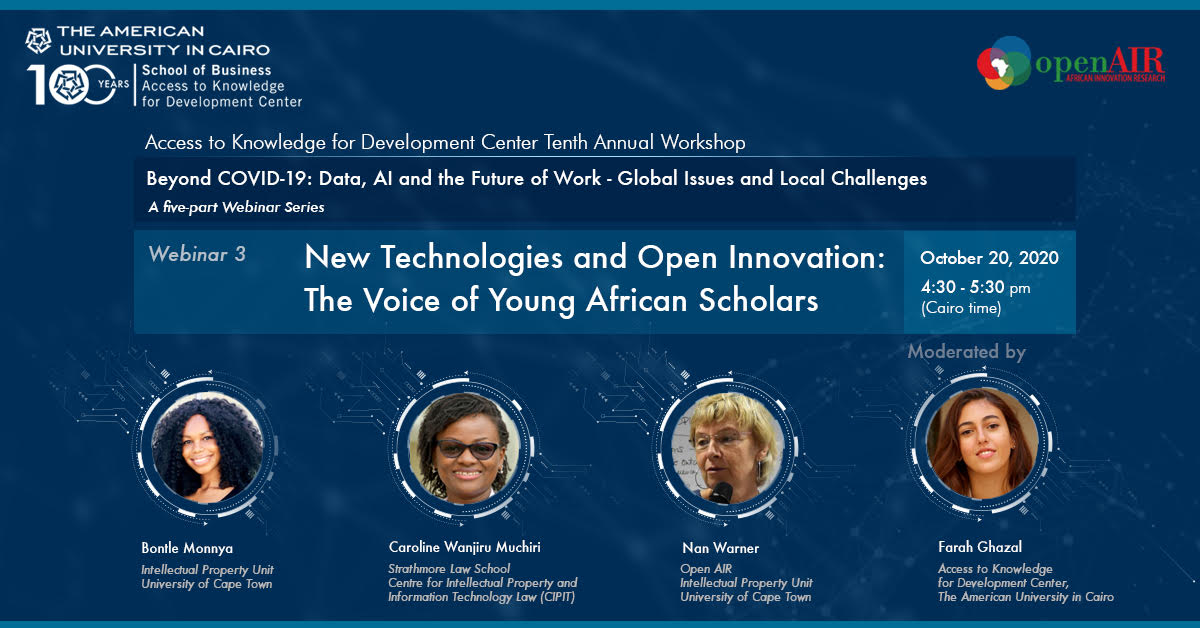 On the 20th of October 2020, the Access to Knowledge for Development Center (A2K4D) held its tenth Annual Workshop “Beyond COVID-19: Data, AI and the Future of Work”. The third session of our 4-part webinar was titled “New Technologies & Open Innovation: The Voice of Young African Scholars,” and explored the scope of current New and Emerging Researchers Group scholars, known as NERGs, within the Open African Innovation Research (Open AIR) network. As the North Africa hub of Open AIR, A2K4D maps Artificial Intelligence (AI) capacities, technologies, and capabilities across the region. A2K4D’s research serves to impact local policy making, bring voices from Egypt and Africa to international scholarship and develop young researchers’ skills. The Center’s research also explores how innovation and knowledge production on the local level can complement those same processes globally. During the session, Nan Warner, Open AIR Program Manager, explained that “mentorship and the development of students and young researchers is crucial to Open AIR’s founding mission.” For this reason, Open AIR offers funding for new and emerging researchers, attracting over 90 enthusiastic and active NERGS since 2015. Once appointed, NERGs produce outputs and may co-author research papers. The aim of this work is to develop their research and community development skills. Warner also highlighted the fact that the Open AIR network has been able to identify and fund researchers outside their local research hubs, especially in the francophone West African countries where Open AIR does not yet have local hubs. Many NERGs have published research papers, presented at conferences, and had various exciting networking opportunities and other research capacity building aspects assuring their future success. The webinar also covered ongoing NERG research on innovation ecosystems in Kenya and intellectual property regimes in South Africa, in addition to the impact of the COVID-19 pandemic on NERG endeavors and the state of innovation in both countries’ respective local contexts. Caroline Wanjiru Muchiri, research fellow and NERG at Strathmore University in Kenya, the Open AIR hub in East Africa, presented her current research on innovation ecosystems in Kenya. Muchiri’s research found that in Africa, research and scholarship is considered to be an open and collaborative project and occurs in response to societal needs in specific contexts. As a result, current intellectual property law regimes in place become insufficient and unconducive of innovation. She emphasized that “Kenyans are quite entrepreneurial and inventive. We are trying to find out how they are scaling innovations, how they are benefiting, and whether these innovations have an impact on their society.” How do intellectual property laws affect the state of innovation in Africa? Muchiri’s research found that Kenyan innovators depend highly on mutual trust between innovators and other informal agreement gestures such as handshaking, which eventually leads to conflicts impeding the implementation and formal registration of the innovation with the relevant authorities. Muchiri explained that social innovation is a primary method of scaling innovations in Kenya, as evidenced by the presence of multiple innovation hubs helping startups and SMEs. However, social innovation has not been incorporated into regulatory government authorities and procedures because they are not necessarily profit-making initiatives. Muchiri also underscored the necessity of this collaborative nature for the innovation ecosystem in Kenya, but maintained that “regulatory procedures must be put in place to assist innovators from the ideation stage all the way to the market penetration stage”. Bontle Monnya, fellow NERG and a postgraduate law student at the University of Cape Town, presented her research on the effects of indigenous traditional leadership laws on women’s access to intellectual property rights. Monnya’s research highlights the ways in which arts and culture have become a form of resistance and empowerment to rural South African women, and examines whether the recent Traditional and Khoi-San Leadership Act (TKLA) is appropriate given the context of female empowerment in the rural craft sector. Monnya explained that, while “traditional leadership in South Africa has historically been summed up by the phrase ‘a chief is a chief by the people’, the institution of traditional leadership was distorted during the colonial and apartheid periods.” The postcolonial South African state had the power to appoint and dismiss leaders, meaning they were no longer serving the people, but instead the colonial and post-colonial state. Traditional leaders, or chiefs, were authorized to allocate land and regularly assigned ownership to men, whereby women had to depend on male guardians to own land, which denied women the power to own their creation and innovation (essentially keeping them under an oppressive patriarchal regime that stifles innovation and creativity). Monnya’s research explores the different and innovative ways that rural women crafters in South Africa are empowering themselves and their community, as well as the legal reforms needed in order encourage this innovation. Monnya’s research also draws attention to the ongoing efforts by many organizations to call for an end to traditional leadership laws and their institutionalization of patriarchal oppression of women, especially those by the Women’s National Coalition. Commenting on the effect that COVID-19 has had on the state of research and innovation in their respective local contexts, Monnya remarked that “this period has been particularly difficult for us as researchers. Libraries are closed, some sources are available online but they require payments to access.” On the other hand, Muchiri pointed out that “the pandemic has also caused an increase in internet connectivity as it became more essential for carrying out different functions of governance and pandemic control.” Overall, the three panelists agreed that the pandemic has exacerbated existing inequalities in their local contexts. Monnya warned that the economic gap between the rich and poor has been exacerbated in research and academia due to the closure of libraries and other resource centers, as well as the paywall requirement to access most online resources. Muchiri added that the higher-income segments of the population managed to survive and conduct their work from home, while the lower-income segments and other low-skilled jobs could not be digitized.